“My mother and sisters and I decided a long time ago that this ranch would be a children’s home.”

Big Springs Ranch, located 9 miles north of Leakey, was given to HCYR in 1996 by Oma Bell Perry to build a children’s home. Miss Perry settled here in 1928 at age 15, ranching its rugged canyons with goats and cattle for 75 years.

Oma Bell loved the land and she loved children. Though she never had children of her own, Miss Perry delighted in visiting the girls and boys who came to live at their new home on the Frio during its formative years. Until her death in 2003, Miss Perry enjoyed being a grandmother to the children.

The Ranch surrounds the headwaters of the Frio River and four miles of its banks. The healing qualities of canyons, with the sounds of the river and wildlife, were well-known to Oma Bell, who believed they would help wounded children, and they have. 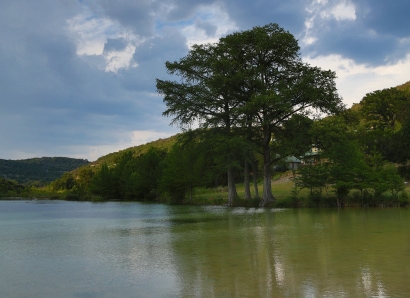 BSRC is now a thriving village, with 8 family-style houses for children, grandparent cottages nearby, and K-12 charter schools. Horseback riding and animal care are cornerstones, and there are also athletic fields, a gym, a chapel, a vocational shop, a general store, a community center, and a library.